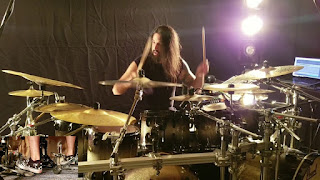 On September 12 Immortal Guardian announced their parting ways with founding member, drummer, Cody Gilliland. After an extensive online search and several auditions Immortal Guardian has found their new member in the talented Canada based drummer, Justin Piedimonte. A native of Montreal, Piedimonte has been performing in metal projects for over a decade and brings a fresh new sound to the rhythm section of Immortal Guardian.

In order to put any doubts to rest from those questioning his abilities to pull off Gilliland's parts, Justin filmed this impressive play through of Immortal Guardian’s single “Zephon” off of Age of Revolution (M-Theory Audio). We hope you can join us in welcoming onboard our new member!

“He impressed us from the very beginning by showing up for the audition knowing the entire Immortal guardian set from the Marty Friedman tour we just finished. Not only does Justin have insane chops, but he is a down to earth - humble dude who fits right in with the team. Looking forward to crushing stages with our new Canadian drummer” - Immortal Guardian

Immortal Guardian and Piedimonte are currently in the process of writing the band's second full length album while gearing up for a busy 2020 having already announced a spring tour as direct support for PowerGlove plus others in the works.