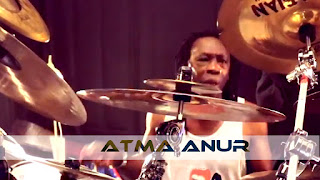 Here is my "drum parts" video for Brazilian guitarist/composer Eduardo Kusdra's piece ELECTRIC NIGHTMARES.
This Eduardo's quote about my video:
"Atma is a drummer known for his incredible work with musicians such as Ritchie Kotzen, Tony Mcalpine, Greg Howe, Jason Becker, Stuart Hamm, Marty Friedman, and many others.
It is an immense honor for me to have a musician like him playing with me."
Electric Nightmares was composed and arranged by Eduardo Kusdra and has the participation of the great Brazilian Violinist Aramis Rocha.
All parts were filmed (guitars, guitars, keyboards and violin) and the full video is being edited by Tião Rocha.
Composition & arrangements: Eduardo Kusdra
Bass, guitars, guitars & keyboards: Eduardo Kusdra
Bateria: Atma Anur
Violin: Aramís Rocha