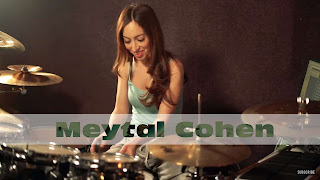 I know we’re all waiting for a new TOOL album, but can I interest you in a new Meytal Tool cover to ease your wait? extra shout out to my patrons for choosing this song a couple of months ago! it was a rough shoot with a million problems, my stomch was hurting from too much popcorn, my left contact lens was bugging me, I moved a microphone which made me feel like the drums we’re closing in on me, and just a million little problems! I was pretty sure I’m gonna want to re-shoot it but minus my slouchy performance, I’m actually really happy with it!

Kevin who usually mixes my videos wasn’t avail, as he was on tour, so this was done by a new mixing engineer, his name is Mazen, he’s from Jordan, a neighboring country to my home land of Israel, and a gem of a human! I think he did a pretty sick job! ALSO! I’m really excited I was finally able to incorporate some pad action, first time for me. I don’t think I did an hhhaamazing job at picking sounds that match Danny’s tabla but A for effort?

DRUMS ONLY avail on Patreon, as well as an anxiety filled complain ridden BTS video. haha!