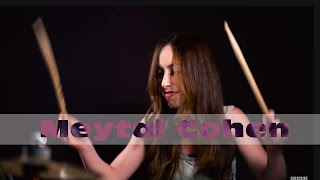 The NEW MEYTAL album is 75% FUNDED! check it outtt 👉 http://meyt.al/te-new-meytal-album

For those of you who might want to point out that this is a really simple song to drum to, let me just say that - yeah SO? :-D
this is one of my fav songs off one of my fav albums, and honestly, it’s THE MOST fun to play to those songs that have inspired me to start playing to begin with - as easy as they may be.