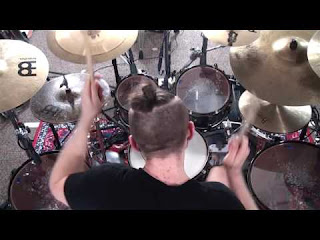 I recorded this video back in December 2014 along with the other Monu videos that I've uploaded. Just getting around to uploading it now!

For anyone that doesn't know, I filled in for Monuments in the Winter of 2014 (hence all the play-through's). "Regenerate" is the fourth & final play-through that I recorded back then.

This video features my Tama Starclassic B/B in Smokey Indigo Burst with Black Hardware. Sizes are as followed...

Shout out to the HOMIE, Adam "Nolly" Getgood for the mix! Killin' as usual.

For anyone interested, the cameras I used for this video are as followed...

In this video I used an array of Byzance & MB20 Cymbals, aside from the stack which is a Byzance 16" China (bottom) & a 13" Soundcaster Fusion Top Hi-Hat (Top). Drum heads are... Clear Emperors on Toms, Coated Powerstroke 77 on the Snare, & a Clear Powerstroke 3 on the kick.

Feel free to add me on your desired social network(s)!