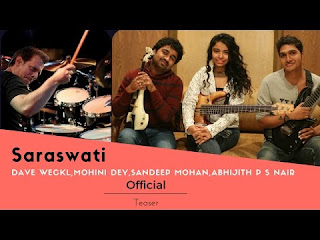 Saraswati Official Teaser...!!!
Facebook Video Link: https://www.facebook.com/abhijithmusi...
Saraswathi Project fuses the the colours of South Indian Carnatic music with the carnatic jazz, funk,World Music, and the grooves of modern pop.
Saraswati -The first track from the Album
Dave Weckl - Dave Weckl is an American jazz fusion drummer and leader of the Dave Weckl Band. He was inducted into the Modern Drummer Hall of Fame in 2000
For more than 25 years, Dave Weckl has developed and maintained a reputation as one of the great living drummers. For this, he has received numerous accolades and honors.
Mohini Dey - An 18-year-old Maestro ,a Bass Guitarist, has been in the limelight since she was 11-years-old. The young star has played with some revered musicians and music composers from an age.
She worked with Steve Vai,A.R.Rahman,Ranjit Barot,Zakir Hussain,Mike Stern etc...
Sandeep Mohan - a guitar Prodigy-young star.
Performed with Shankar Mahadevan,Sivamani and many more legenderies in india.
He has done lots of national and international shows in France, Germany, London, USA, Singapore, Malaysia, and South Africa and includes almost all Arab countries.
Abhijith P S Nair - A glaring example of total dedication&depth,Mastering over one of the most difficult unique string instruments ‘ Violin’, Abhijith is today acclaimed as an outstanding artist of India.
His perfect restrained tuneful music enthralled the global audience.
He has Performed with great artists like Padmashree Dr.K.J.Yesudas,Kalaimamani Sivamani,Mandolin Maestro U Rajesh,Ranjit Barot and many more legendaries in the field of music.
The entry to film industry as a music director with much hyped "Akashangalil" has only enhanced his stardom.
This Album featuring more artists in the next songs such as, Ranjit Barot and some surprise artists...