Aquiles Priester: with Gustavo Carmo - The Old Man and the Sea (DVD TEASER) 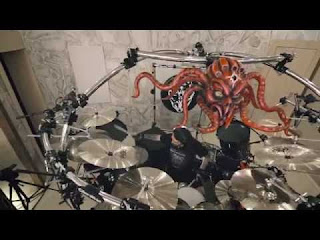 Our Lives, 15 Years Later .. .live In Studio! is must-see material is instrumental music lovers. Aquiles Priester's and Gustavo Carmo's new DVD, with special participations by Junior Carelli and Bruno Ladislau, shows the full execution of the homonymous album released in 2014. Now you can Accompany the incredible performance of These four musicians in HD and crystal clear sound, making this DVD one of the best ever to be released in this segment. Besides not missing any detail due to 14 cameras que register the musicians' performance, the bonus features drum, guitar, keyboard and bass lessons with a duration of 60 minutes.

Our Lives, 15 Years Later ... Live in Studio! It is a must material for instrumental music lovers. The new DVD Aquiles Priester and Gustavo Carmo, with special participation of Junior Carelli and Bruno Ladislau, shows the execution in the eponymous disc full, released in 2014. Now you can stay on top of the incredible performance of these four musicians with HD image and sound lens, making this one of the best DVD ever released in this segment. Besides you do not miss any details because of the 14 cameras that record the performance of musicians, has yet to bonus drum lessons, guitar, keyboard and bass, lasting 60 minutes.
Antonio Carlos Monteiro
Journalist, musician and music critic