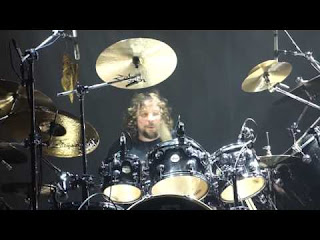 Marco Minnemann (born December 24, 1970) is a German drummer, composer and multi-instrumentalist. Marco Minnemann has published a number of solo CDs. On most of them he performs all instruments and vocals. He is known for developing a very advanced drum technique called interdependence allowing him to play various patterns with each of his feet or hands, and has published several instructional books describing this concept.
In 2011, he was the runner-up in a series of auditions for Dream Theater after Mike Portnoy left the band in 2010. Marco also performs with several other groups. Since 2011 he has been a member of Steven Wilson's studio band and, on occasion, his touring band as well. He is a member of the rock group The Aristocrats and has performed with Joe Satriani since 2013.
This is recorded at the Poppodium Hedon Zwolle on 24th of June 2016, the Netherlands.
Note: I'm not the owner of this song so all rights belong to this band and their label. This upload is for promotional purposes only! If you like this band, support them by sharing this upload and by buying their stuff !!!
http://marcominnemann.com/
https://www.facebook.com/marco.minnem...
Marco Minnemann Drum Solo 24-06-2016 The Netherlands Hedon Zwolle
Marco Minnemann