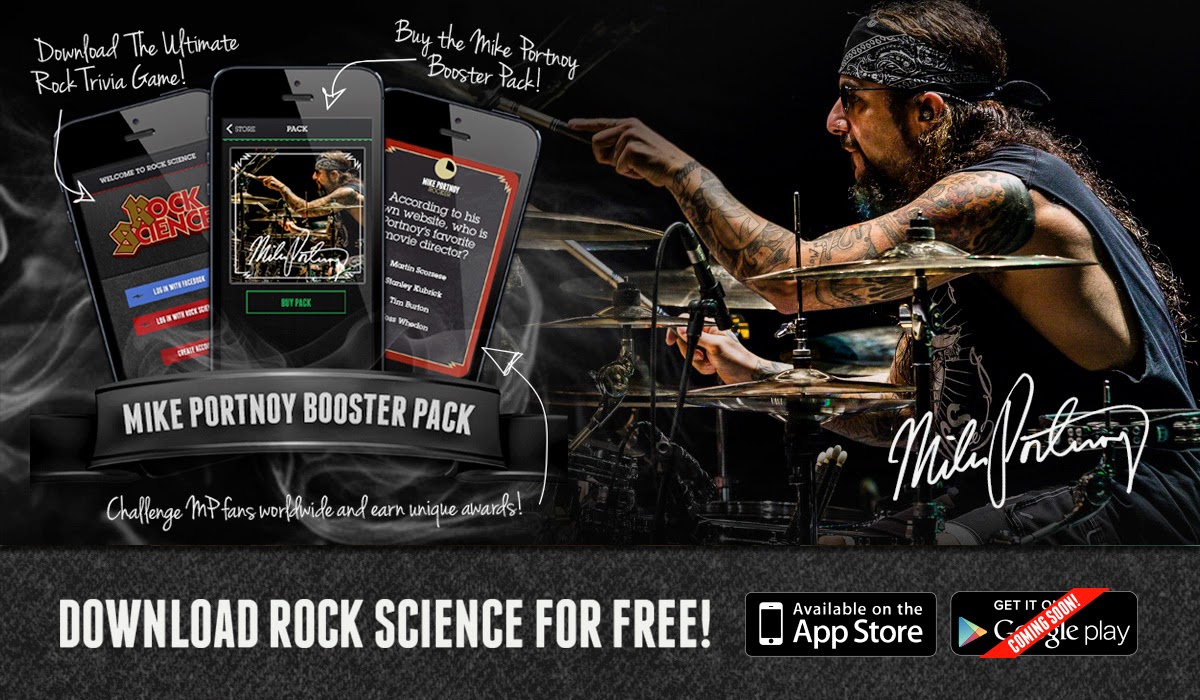 ROCK SCIENCE – THE ROCK GAME OF THE CENTURY – DEBUTS
MIKE PORTNOY TRIVIA BOOSTER PACK FOR IPHONE
Available Now in the iTunes App Store, Download the Rock Science Mobile App and Challenge Fans Around the Globe to See Who is the Biggest Mike Portnoy Fan in the World!
(9/11/14 – Date) Are you the ultimate Mike Portnoy fan? Download the free Rock Science Mobile App from the iTunes App Store and grab the Mike Portnoy Trivia Booster Pack to find out! Available now as an in-game, add-on to the Rock Science Mobile App for iPhone, the Mike Portnoy Booster Pack from Nuday Games features questions about Mike Portnoy, Dream Theater, The Winery Dogs, Transatlantic, Flying Colorsand much more. Compete with your friends, or with other Mike Portnoy fans around the globe to reach the top of the leaderboard and prove for once and for all that you are the biggest Mike Portnoy fan in the world!
Rock Science is social gaming and rock trivia combined. The two-player mobile app game allows you to hook up with your friends and challenge them in head-to-head rock and metal trivia battles. Download your favorite booster pack of questions that focus on a specific artist, style of music, or musical era and start playing! There are three levels of question difficulty ranging from “Poser” (easy question, worth one point) -- to “Fan”(medium difficulty, worth two points) and the most challenging of all, “Scientist” (difficult, worth three points). By collecting points for correct answers, players journey through a vast number of levels earning awesome titles and awards. Each booster pack also has it’s own leaderboard, where the top gamers are displayed for the world to see!
Click HERE for very special video message from Mike Portnoy!
About the Mike Portnoy Booster Pack
Progressive rock/metal drummer Mike Portnoy first impacted the music world in the early '90's as a founding member of the critically acclaimed and wildly successful progressive rock band Dream Theater. Throughout his 25-year career with Dream Theater, the band enjoyed massive, worldwide commercial success selling more than 12 million albums. Mike Portnoy has won 29 Readers Poll awards from Modern Drummer magazine and is the youngest person in their Hall of Fame. Throughout his career, Mike Portnoy's musical diversity and artistic passion have influenced legions of young drummers, and his performances with numerous other acts such as Avenged Sevenfold, The Winery Dogs and Flying Colors among others, constantly excite and engage new legions of Portnoy fans. This killer in-game booster pack is dedicated to all things Mike Portnoy -- arguably one of the most exciting and influential drummers of his generation. The free Rock Science app is available for download in the iTunes App Store, and the Mike Portnoy Booster pack is on sale now as an in-game, add-on.
About Nuday Games and Rock Science
Rock Science is the main title of game studio Nuday Games. Based in Stockholm, Sweden, Nuday Games is a producer of digital and physical music-branded trivia games. Founded in 2010 by rockers and gamers, the company debuted it’s flagship trivia board game Rock Science, available at www.rockscience.tv, which has been translated into English, German, Swedish and Finnish. The company also produced the 50th Anniversary Marshall Amplification game, the Motörhead board game and the Drum Channel Game. Nuday Games are now going digital together with the heaviest rock bands in the world.
Download the Rock Science App for free today: http://tiny.cc/fu3gkx
Mike Portnoy video message: https://www.youtube.com/watch?v=1i_e2r27tW4&feature=youtu.be
For additional information, visit http://www.rockscience.tv/games/booster-packs/artist-packs/mike-portnoy