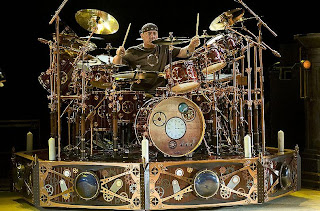 On June 9, 2011, Neil Peart of Rush concluded Drum Solo Week on "The Late Show with David Letterman," culminating into the first time a member has been on the late night scene since 2008.

Enjoy the best drummer of his craft wow the audience with an abridged solo from Rush's "Time Machine Tour."