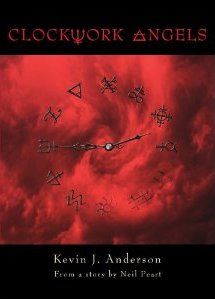 We spoke about how certain types of music inspire your and inform your writing process. Can you elaborate?

I've always been inspired by music as I envision and write my stories, and the music of Rush has been a particularly strong influence. Listening to the music, along with innovative or thought-provoking lyrics, was like a catalyst for my imagination, triggering scenes or whole plots. My first novel Resurrection, Inc. (1988, and just reissued) was almost entirely inspired by the Rush albumGrace Under Pressure. As I was developing the framework of the novel, listening to that album, it seemed as if the songs drove my plotting. Because of that novel (and a nod to the inspiration of Rush in the acknowledgments), I got to know Neil Peart, who writes the lyrics for Rush. We've known each other for more than twenty years, interacted in our separate creative fields -- his music, my fiction -- and we even wrote a short story together. When Neil began to conceive the steampunk fantasy story that eventually became Clockwork Angels, he used me as a sounding board for some of his ideas, since he had read some of my earlier fantasy novels that had steampunk elements, Eventually, as the story of the album -- as told in snapshots of the music tracks -- grew, Neil asked me to work on the novel.