Lalle LarssonListen to some soundclips from the new eclectic album by Phi Yaan Zek - Deeper With The Anima! This is a totally unique experimental creative mix of Yaan Zek freak out, the album features yours truly on keys and Marco Minnemann on drums. The dance album of the summer maybe?

You can preorder this CD here as part of a special 2 CD package with Dance With The Anima and save £5.W

Deeper with the Anima

Deeper With The Anima is the companion album to Dance With The Anima with the music focusing towards a very dynamic guitar instrumental direction and featuring new and extended pieces based on themes from the original album along with 3 exciting guest remixes. It’s a passionate and very unique journey that takes you from the cinematic jazz with tasteful atmospheric playing of “Mariana’s Deeper Dive” to its opposite polarity in the no-holds-barred dark and intense augmented tribal hypershred insanity of “The Shrine Of The Augmented Weave”! Not to mention along the way there’s a wonderful Piazzolla meets Gotan Project style tango (“Corazones En Fuego”), a beautifully catchy summery drum and bass acoustic fusion tune (“Signposts 2”), a John Coltrane/Pharoah Sanders inspired 4 minute guitar solo (“Love Abounds”), a drum and bass driven Beltway Bandits Zappa-style highly-detailed long-form melody piece (“Melodies Of Me Three”) and many more inspiring groove-orientated tracks.

“I was getting such a creative high composing and recording the music for "Dance With The Anima" that it seemed a shame to finish it there. Being part of Marco Minnemann's Normalizer 2 project, one of the main rules was that the drums could not be edited in any way. This restriction actually provided the impetus for new creative avenues and the music on "Dance…" would not have existed were it not for this musical challenge. However I felt some of the compositions needed another lease of life in an extended form, and so the idea of a companion remix album was born. After having given out some of the tracks to be remixed, and having started the remixing process myself, it became apparent that the creative energy behind the music didn't want to be limited to simply just an album of remixes. New compositions started to grow out of old ones and Marco's drum grooves provided the seed for many new musical ideas. This led to another year of intense recording work to add all the new melodies, grooves and solos to the music, with the guitar now becoming the main focus. The result, although related to "Dance…" in themes, mood and atmosphere, stands in its own right as a separate album with many stunning new performances and its own personal artistic voice. Enjoy the deeper journey…”
Phi Yaan-Zek June 2012 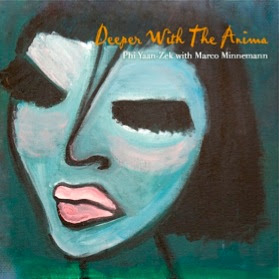