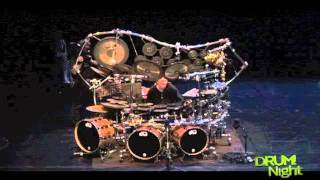 Here's a selection of Terry Bozzio's amazing performance at the 2011 DRUM! Night festival last August in San Jose, California. His segment was remarkable because of his use of the drum kit as a melodic instrument rather than just a tool for playing rhythms.


In this second clip from his performance at last August's 2011 DRUM! Night festival, Terry Bozzio improvises over a 5/4 bass drum ostinato. Rather than taking the opportunity to rip some of his ferocious chops, Bozzio uses his carefully tuned drums and cymbals to create a contemplative drum composition that explores the possibilities of texture and melody.